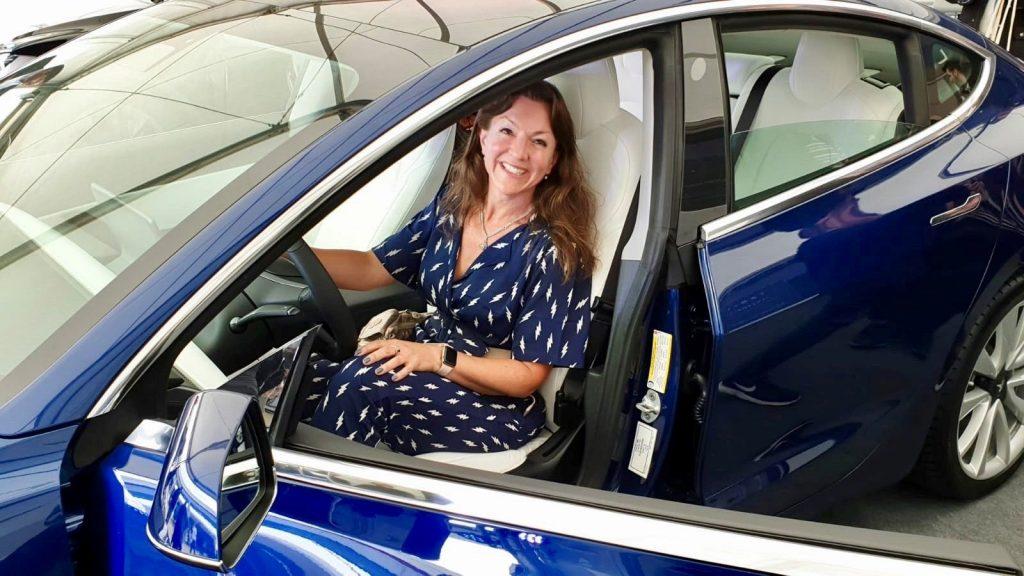 Gill Nowell is a founding member of the EV Association of England, and has been a passionate advocate of electric vehicles since 2012. Here she tells us how she fell in love with EVs and, in particular, with driving and charging her own meticulously researched Nissan Leaf…

My journey into electric vehicle-dom started in 2012 because of my work. I was tasked with a bid for a project looking into the impact of clusters of electric vehicles on the grid. This bid turned into My Electric Avenue, the first electricity network innovation project with real-world trials.

How I fell in love with electric cars

It was through My Electric Avenue that I was lucky enough to have my first drive in a Nissan Leaf, which was one of the only viable makes of electric car eight years ago. I fell in love immediately. From the ‘so how do I turn it on?’ to the ‘oh, it’s on already…??!’ feeling when I first sat in the vehicle, not forgetting the impressive 100% torque and pleasant surprise at it being so quick off the mark.

What a joy to drive. In my experience, electric cars are smooth, silent (apart from the slight sound of the tyres on the tarmac), and remarkably enjoyable to drive on the open road. It was the start of something special.

Driving an electric car does require a slightly different driving style, in my opinion. They are so much quieter than their internal combustion engine counterparts, that the onus is on the electric car driver to be ultra aware of their surroundings – of pedestrians, of horses, of cyclists and so on. I don’t consider this to be a bad thing. I am a keen runner, and although I do most of my running off-road, there are times when I run on the pavement. I do hear electric cars as they approach, but there’s no doubt about it – they are far quieter. I can’t help thinking that horses must appreciate the advent of electric cars though, over the roar and smell of a petrol or diesel car.

Speeding in an EV

Over the next few years I worked on other electric vehicle and grid integration projects, such as Electric Nation and Smart EV. As part of this I had a chance to do numerous track test drives, most of them at Millbrook Proving Ground where they road test all manner of exciting modes of road transport.

Millbrook has a range of different tracks to mimic real-world driving conditions and environments, as well as a test bowl. My most thrilling drive around the bowl was in a Tesla Model S, at speeds far out-pacing UK limits.

My love affair with the electric car blossomed, but it wasn’t until January 2019 that I took ownership of my first electric car. Though I had been hooked for years, I couldn’t justify the outlay for a new (or secondhand) car when I already had the use of a diesel car… until that vehicle was written off. The silver lining of that particular incident was my propulsion into electric car ownership.

To be honest, I would have struggled to find a car to suit my needs, and within my budget, had I not worked closely with the industry for several years. Range and cost were two of the main deciding factors, as well as the fact that I wanted to own, rather than lease, the battery. I knew that I’d need 100 – 120 miles’ range, and my budget was in the region of £12k. Size was of course a factor as well – any car had to accommodate myself, two children and plenty of ‘Stuff’ at any one time. It also had to have three seats across the back, for the times when we had friends with us.

Searching on the usual suspects’ websites for used cars drew a blank. I found the electric car-specific information severely lacking, particularly around real-world driving range. Many websites did not even mention range. I visited one mainstream dealership, and it was clear that they had limited knowledge of the two Nissan Leafs that they had in stock. Thankfully, I knew to speak to Jonathan Porterfield (EcoCars) and Matt Cleeveley at CleevelyEV, and that set me on the right track. Matt, together with Lewis Black from e-Cars Trading, found me my ideal electric steed – a 30kWh Nissan Leaf Tekna.

That’s part of the problem for EV-buyers – there isn’t just one ‘Leaf’ to pick off the shelf. Small differences actually mean quite a lot. This particular model of Leaf gives me an average of 100 miles of real-world range: up to 120 miles in summer and a little less than 100 miles in winter. With a 6.6kW charger on board the car (as opposed to 3.3kW), it also means that I can charge at a decent rate at home and when I’m out-and-about using public chargers. It is also spacious and has a boot that can be filled with that endless Stuff.

Is a home charger the hero?

As soon as I knew that I was in the market for an electric car, I was almost as excited about looking for a home charger. I must be quite unique in this respect! The vast majority of people who have off-street parking opt to charge at home overnight. I fall into this category. This is where Ohme leapt to my rescue with the offer for me to be a beta tester for an intelligent charging cable – essentially a smart charger with a brilliant app that lets me set my charging to suit my needs, my pocket, and my green credentials.


For an energy professional like me, this is where it all gets really interesting! The relationship between electric vehicles and energy is becoming ever more prescient and intertwined.

Electric car – bad news or bonus for the grid?

My early work with the My Electric Avenue project involved looking at the impact of electric vehicles on the Low Voltage (LV) network. This is the myriad of underground cables and overhead lines that act as the conduit for the electricity supplied to our homes and small businesses. (We’re talking local level, not at National Grid transmission level).

When more and more electric cars charge within one or two streets of each other, they could stress the LV network – which is something that nobody wanted to happen. There are six Distribution Network Operators (DNOs) in Great Britain, and it’s their responsibility to make sure that the lights stay on.

The DNOs have been working ahead of need since 2012 to ensure that our local electricity networks will be able to facilitate mass adoption of electric vehicles. Electric vehicles are a significant new demand on the network, that nobody would have anticipated back when they were built in the 1930s.

Smart charging – being able to remotely manage electricity demand – plays a key part in reducing stress on LV networks. In fact, My Electric Avenue was the first project in the UK to trial one of the earliest types of smart charging technology, and it found that drivers were overall accepting of having their charging managed. Even back then.

The development of smart charger and vehicle-to-grid solutions have shown we have answers for the demand that electric cars put on the energy networks. However, the energy innovation that has erupted in recent years (from a multitude of areas) is quite phenomenal and goes above and beyond the worry about ‘coping’ with electric cars. A great example of this is Octopus Energy.

Not long after setting up with my Leaf and my Ohme smart charger, I decided to switch to the dynamic off-peak tariff offered by Octopus, called Agile. I had to wait a couple of months for a meter installation, but then lo and behold, there I was having my energy priced in half-hourly blocks with all the information fed back by the smart meter (SMETS2). Ohme and Octopus work hand in hand to ensure that my use of energy is optimised when it comes to charging my car.

There is great excitement (on my part at least) when it is particularly windy and the ‘plunge pricing’ alert pings up on my phone. A surge of renewables on the energy system, means I can actually get paid to charge my car to balance the excess supply being generated and sent across the grid. This is when my relationship with my energy use is at its happiest.

I work for a company called ElectraLink, the UK’s energy market data hub. Owned by the six GB DNOs, we manage a vast amount of energy market data on behalf of the energy industry. For example, spotting previously unidentified instances of electric cars and solar PV on the LV network – so DNOs can better plan their network upgrades and investment. We can make this data available for innovation and to support the transition to a smarter, more flexible energy system.

So then, what of the pandemic and our general relationship with energy? If I may switch the focus to, well, switching energy suppliers. ElectraLink runs the Data Transfer Service, that underpins the operation of the retail energy market. Suffice to say, ElectraLink knows a lot about energy supplier switching. We have the entire switching history of the UK, going back for almost eight years.

There is light at the end of the tunnel though. On 7 August, ElectraLink reported potential signs of recovery for the UK, with 543,000 switches completed in July marking both a year-on-year and month-on-month increase in switches completed – 16 percent more than June 2019. And by 12 August we reported a significant upturn in smart meter installations. With the resumption of non-essential visits, July’s figures were close to 152,000 which is 120 percent more than the previous month. While July’s figures still show a 36 percent drop against the same month last year, the gap is closing (June 2020’s numbers were 67 percent down on the previous year).

With smart meters and associated ‘EV tariffs’ being increasingly linked to optimised electric vehicle charging, it is good to see that smart meter installations are on the up again.

Electric vehicles have given me a new appreciation not only for how I use my energy, but also for the innovation opportunities that they afford. And in support of this, in 2019 I set up EVclicks, an online library of freely available electric vehicle images for use by communities, projects, people and businesses, in aid of the transition to zero emission transport.

I am also proud to be a founding Director of the newly launched Electric Vehicle Association (EVA) England, a Community Interest Company that is committed to providing a voice for EV drivers in England and promoting the broader environmental and health benefits of electric vehicles.

One of the earliest things we did was to run a survey on the phase out date for a ban on new sales of petrol and diesel cars and vans. We received over 1,100 responses, which we have fed back to UK Government to inform future policy. 96% of survey respondents believe that an earlier phase out date would have a positive impact on public health, whilst 64% of all survey participants believe that the phase out date should be moved to 2030. This is hugely encouraging, and aligns well with the Committee on Climate Change’s recent recommendation that we need to ban sales of internal combustion cars and vans by 2030 if we are to meet our climate change obligations. Needless to say, EVA England intends to make a positive difference for EV drivers. I’m proud to be a part of it.

Subscribe to Gill’s new YouTube channel – one woman and her everyday life with an electric car: https://www.youtube.com/channel/UCZxtUt2_XFxu3TqK9ALL0XQ